I had the honor of providing a public deputation for Toronto City Council along side Food Allergy Canada in support of Councillor James Pasternak’s motion to investigate mandatory Stock Epinephrine at Toronto restaurants. The summary of the motion states:

Going into it, I knew we were facing an uphill battle with the idea of mandatory epinephrine, but the motion was to investigate the issue. My optimism (and naivete) led me to believe that the investigation could lead to discussions with various stakeholders across the city, and whether or not the mandatory Stock Epinephrine motion would be eventually tabled, food allergies would be discussed as a growing public health concern.

I am utterly disappointed that the Licensing and Standards Committee voted to “defer indefinitely” the motion to investigate mandatory epinephrine in Toronto eateries and other public facilities. The conversation ended before it even begun.

The Councilors seemed to be making advance judgement based on personal bias on the appetite for mandatory stock epinephrine in Toronto restaurants, and not interested in undergoing at true investigation. Unfortunately, the supporting document for the motion was a simple 1 pager that did not contain many supporting facts to help push this forward, and despite the huge outpouring of public support letters in favor of the motion, there were 2 very strongly opposed positions coming from the hospitality industry, which councilors seemed to put more weight to. It’s obvious that if a motion like this has any chance to move forward in the future, there needs to be a champion from the industry backing it and explaining why it makes sense operationally.

The most important take away from this experience is that as a community, we haven’t even scratched the surface when it comes to educating the public about food allergies and epinephrine. The City Councilor comments and the information they used to come to their final decision were based on assumptions, miseducated testimony and untruths. I am compelled to set the record straight.

Untruth #1: Epinephrine is not the only appropriate drug to use in an allergic reaction

Antihistamines like Benadryl or Atarax are commonly used for treating hives or other skin symptoms, but they do not treat the life‑threatening symptoms of anaphylaxis. “Epinephrine is the only drug that can reverse symptoms of anaphylaxis. Canadian allergists advise that an epinephrine auto-injector is the first line of treatment for anaphylaxis and should be used first, before asthma puffers or any other medications.” (Source: Food Allergy Canada)

Epinephrine acts on a number of receptors in the body to exert its effects. It causes constriction, or tightening, of the blood vessels, which decreases swelling and also helps to increase blood pressure. It also increases the heart’s contraction and heart rate, which can help to prevent or reverse cardiovascular collapse. Epinephrine relaxes the muscles around the airways in the lungs, helping the airways to open up. Finally, it prevents the release of additional allergic chemicals, which aids in stopping further progression of the reaction. No other medicine acts on so many body systems, which is why epinephrine is the drug of choice for anaphylaxis. (Summarized from Allergic Living)

Untruth #2: Epipens could cause fatal harm

Councilor Jim Karygiannis asked “So, this could have a reverse effect that somebody thinks they’re having an allergic reaction, hits somebody, and that might cause them fatal harm?” Commander Bikram Chawla with Toronto Paramedic Services responds “Theoretically, there is that potential.”

Common side effects of epinephrine include fast, irregular or “pounding” heartbeat, sweating, nausea or vomiting, breathing problems, paleness, dizziness, weakness, shakiness, headache, feelings of over excitement, nervousness or anxiety. These side effects usually go away quickly if you lie down and rest. (Source: Epipen)

The minimum lethal human dose by subcutaneous injection is estimated as 4mg. (Source: US National Library of Medicine)

Epipens come in 2 standard doses of 0.15mg and 0.3mg of epinephrine, which is significantly lower than a dangerous dose. To put things into perspective, you would need 26 simultaneous shots from an Epipen Jr. to receive a dangerous dose.

Untruth #3: Food Allergy and Auto-injector training is too difficult

Councilor Frances Nunziata shared “I do have an Epipen. I have allergies. I’ve had to use mine many times. But I would not feel comfortable being in a restaurant or any establishment and having someone stab me with an Epipen not knowing how long they’ve had that Epipen … So to have establishments and restaurants like Tim Horton’s and McDonald’s be trained, I think we’re in really muddy waters.”

An Epipen is actually much easier to use than some may realize. The instructions are illustrated on the device in 3 simple steps. Practice Epipens also help make training easier and more effective. 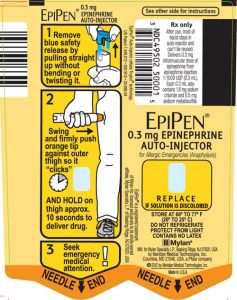 Assumptions that every single staff member in the restaurant would need to be educated like a paramedic so they could recognize symptoms of allergic reactions and administer Epipens made this motion difficult for Council to support. They did not recognize that similar to AED’s that are available at public places, Epipens would be available as life-saving devices to the people who need them and know how to use them.

A stock epinephrine and mandatory food allegy education program for the hospitality industry in the city of Toronto is the right thing to do. It has huge benefits for the safety of the general public and increases public awareness of food allergies. Restaurant staff are currently trained at different capacities on how to keep customers safe by minimizing risks of bacterial food poisoning, and it is equally as important that they are trained on food allergies and how to minimize cross-contamination risks.

There is still a lot of work to be done. As a food allergy advocate and someone invested in the City of Toronto, I’m grateful to Councilor Pasternak for bringing the motion forward and to the Licensing and Standards Committee for discussing the possibility. As a community we will move onwards and upwards from this and continue to educate others and correct untruths.

Here’s a clip of my public deputation in support of Stock Epinephrine at Toronto Restaurants.

Watch the the full Licensing and Standards Committee Meeting here. Skip to 6:07:18 for the discussion on Stock Epinephrine.